Or are you looking for: 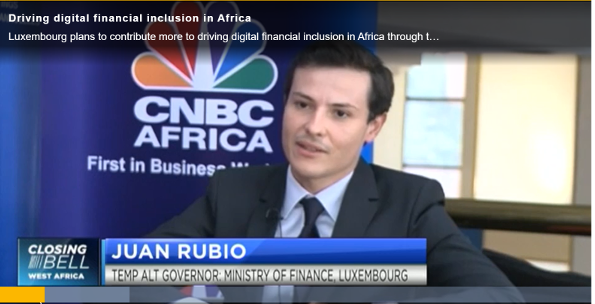 When asked about the importance of financial inclusion in Africa, a key pillar in the work of the African Development Bank as stated by President Adesina in his opening speech, he referred to the Government of Luxembourg’s significant contribution to the agenda through the Africa Digital Financial Inclusion Facility (ADFI).

As a founding ADFI partner, together with the Agence française de développement, the Bill & Melinda Gates Foundation and more recently France’s Ministry for the Economy and Finance and the World Bank hosted Women Entrepreneurs Finance Initiative (We-Fi), the ADFI partnership looks to contribute to addressing the challenge of 332 million Africans who are financially excluded, of whom 60% are women. This total represents a quarter of the population of Africa.

He described how the ADFI partnership works across Africa as a financing scheme to foster greater digital financial inclusion that allows excluded groups, such as smallholder farmers, SMEs and microbusinesses to have access to digital financial services. The facility’s interventions are based on 3 pillars: policy and regulation, digital infrastructure and digital products and innovation.

“The ADFI partnership is open to new partners with fresh funding to create even greater impact.”

Mr Rubio stated that ADFI operates as a blended finance vehicle which leverages the African Development Bank’s traditional concessional financing with grants and that an indicator of how it is proving successful is the addition of new partners. He explained that the ADFI partnership is open to new partners with fresh funding to create even greater impact.

“ADFI contributes to building resilience through digital access to products such as insurance, weather data and agronomy knowledge to help mitigate against climate-based challenges such as crop destruction, droughts and floods which significantly reduce agricultural yield.”